The rustic escape we have been dreaming of…..
a week full of doing nothing just sunbathing under the Thai sun and enjoying island specialties!
We flew out of Sendai on Friday evening knowing full well that we had a lovely 25 hour journey ahead of us but we couldn’t care less! It was vacation time. Three connecting flights as well as a night at the Singapore airport (seriously, an awesome airport with lots to do, even at 3am)  brought us to Koh Samui, Thailand on Saturday morning. From there it was a quick 30 minute speed boat ride to the Santhiya Resort and Spa on Koh Phangan. 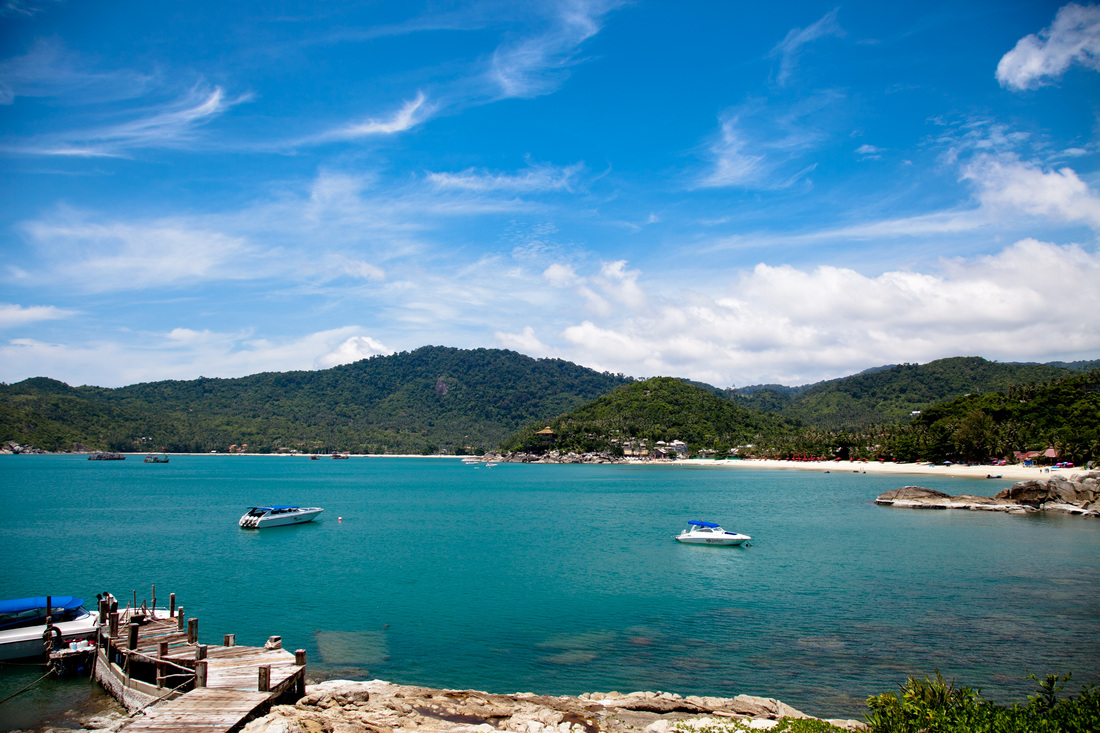 We couldn’t believe how beautiful the resort was! Simply stunning! Rustic, traditional, quiet, and had amazing Thai details everywhere! The resort is located on the northeast part of the island, the area is called Thong Nai Pan and offers a very laid back atmosphere. 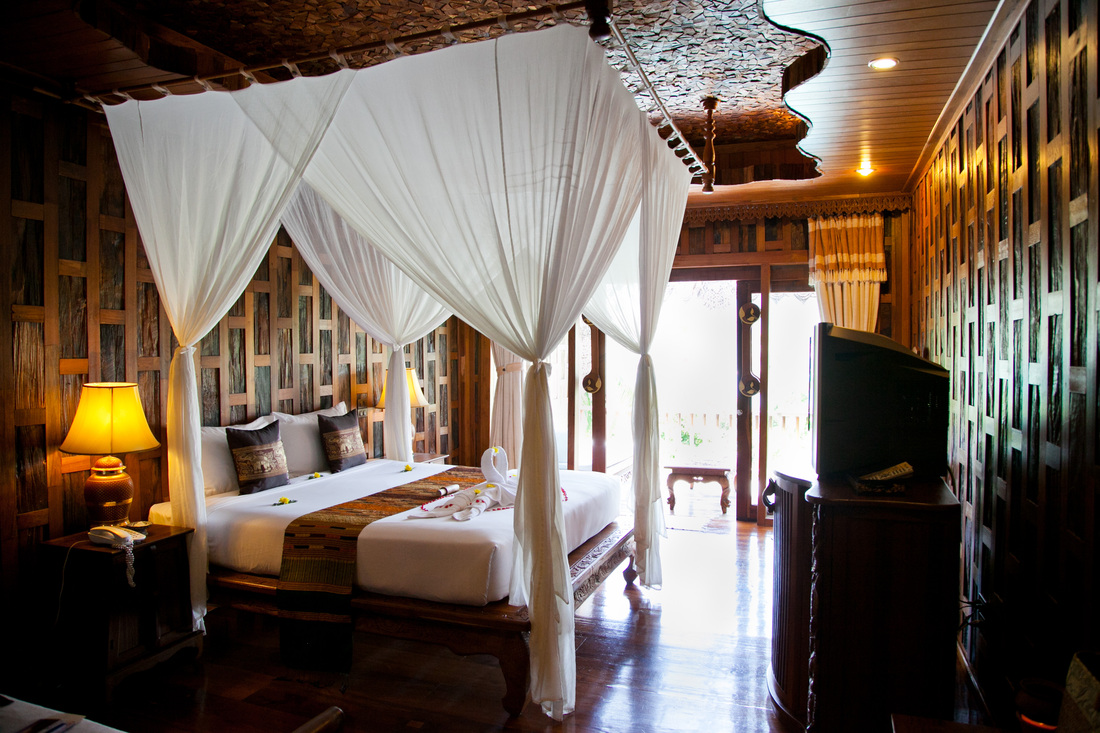 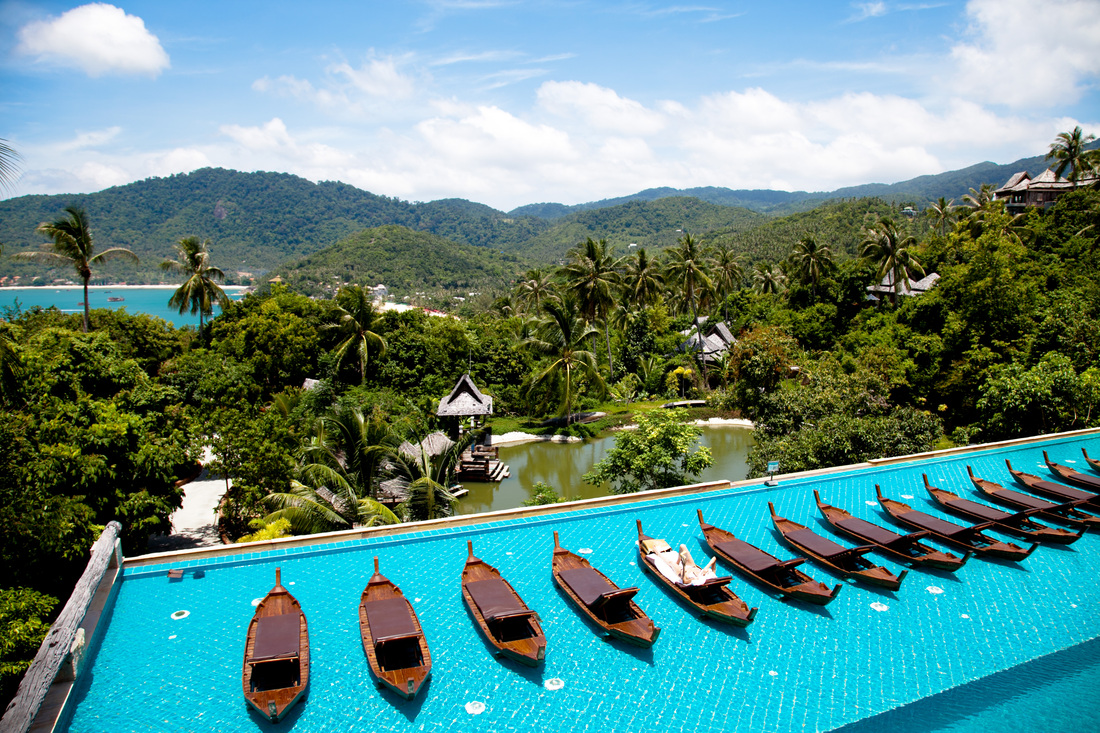 Stunning view from our suite.
We were happy to spend the majority of our time at the resort but also explored a beach and village located close to the resort. We split our meals between two local restaurants where you could order $2 beers and delicious pad Thai for $5.
A couple of times we went into town, a small village, to buy aloe vera as well as some $1 beers. Who would have thought that two people who haven’t seen the sun in 9 months would burn, on the second day nonetheless!? We both did!
The village was a bit rough around the edges but the locals seemed nice and there were lots of little restaurants as well as Thai massage places along the street. We got an awesome one hour Thai massage on the beach for ten dollars!
Talk about getting a lot for your money! 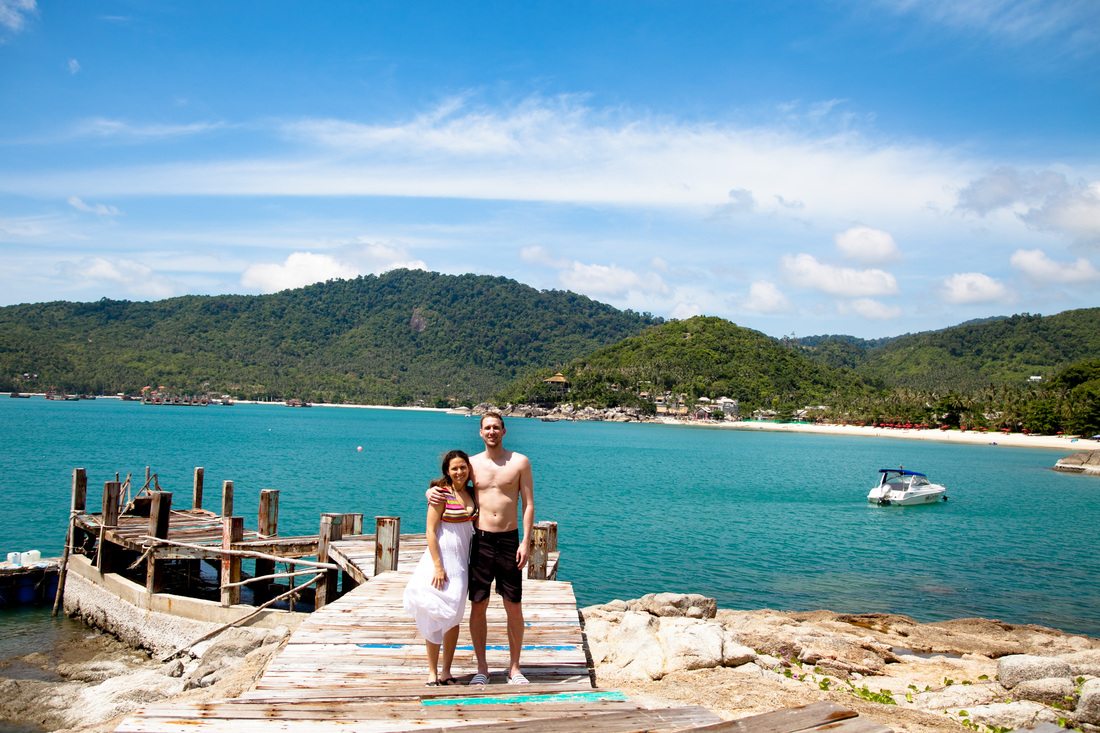 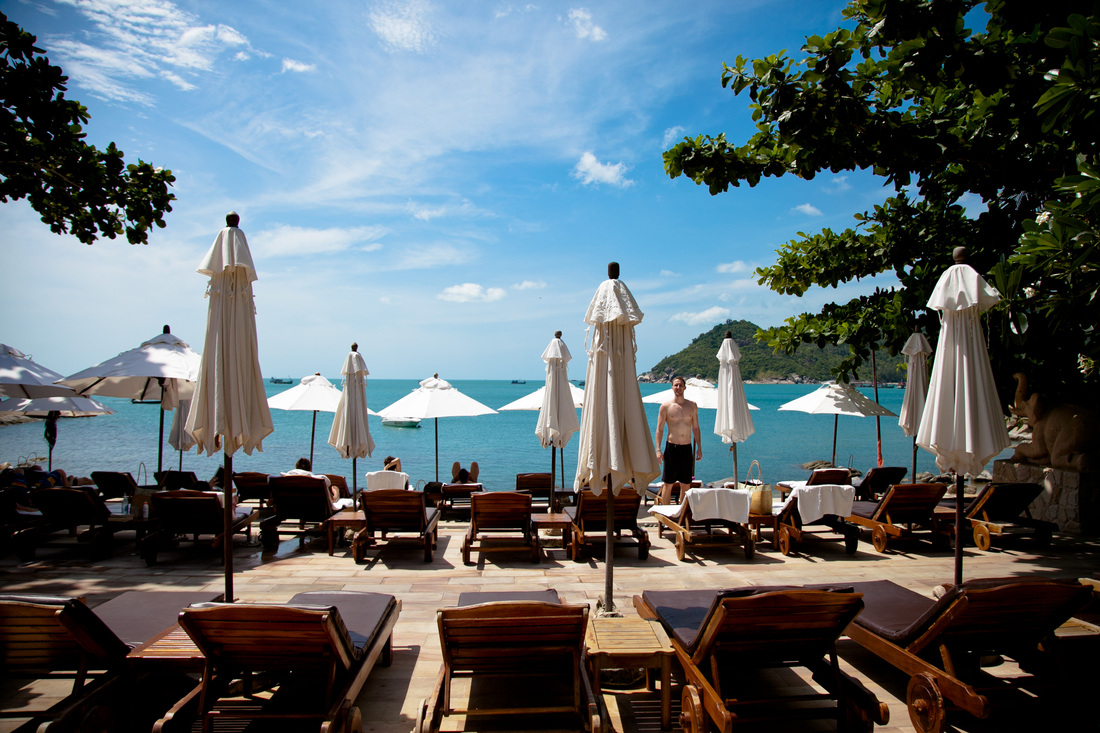 Pool right by the beach. 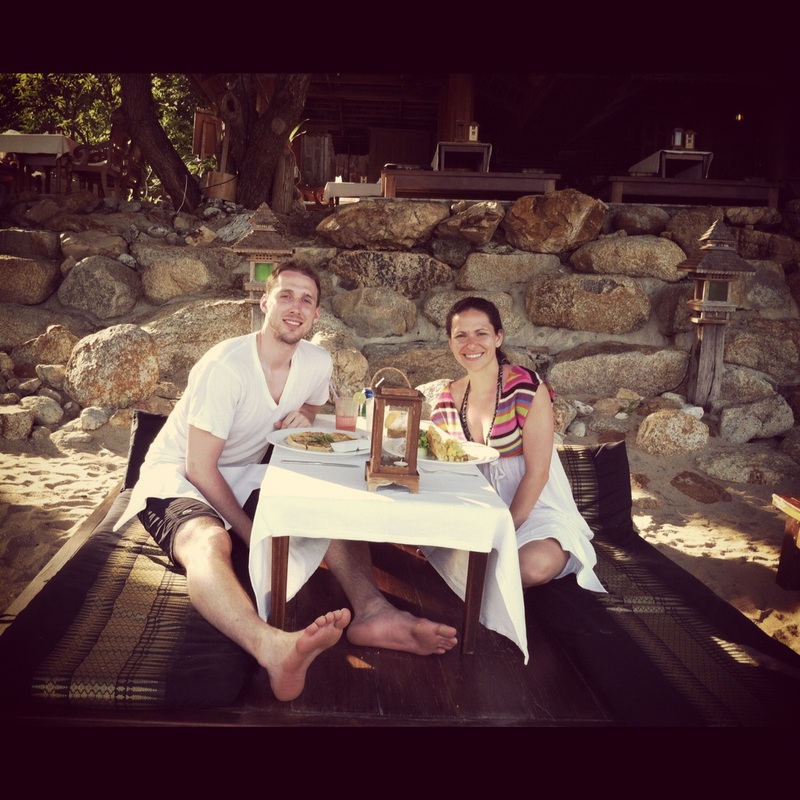 Lunch at the resort.
We spent a lot of time hanging out at a nearby beach. We were fans of the soft sand and cheap Thai meals! Plus, the taxi boats were absolutely beautiful. 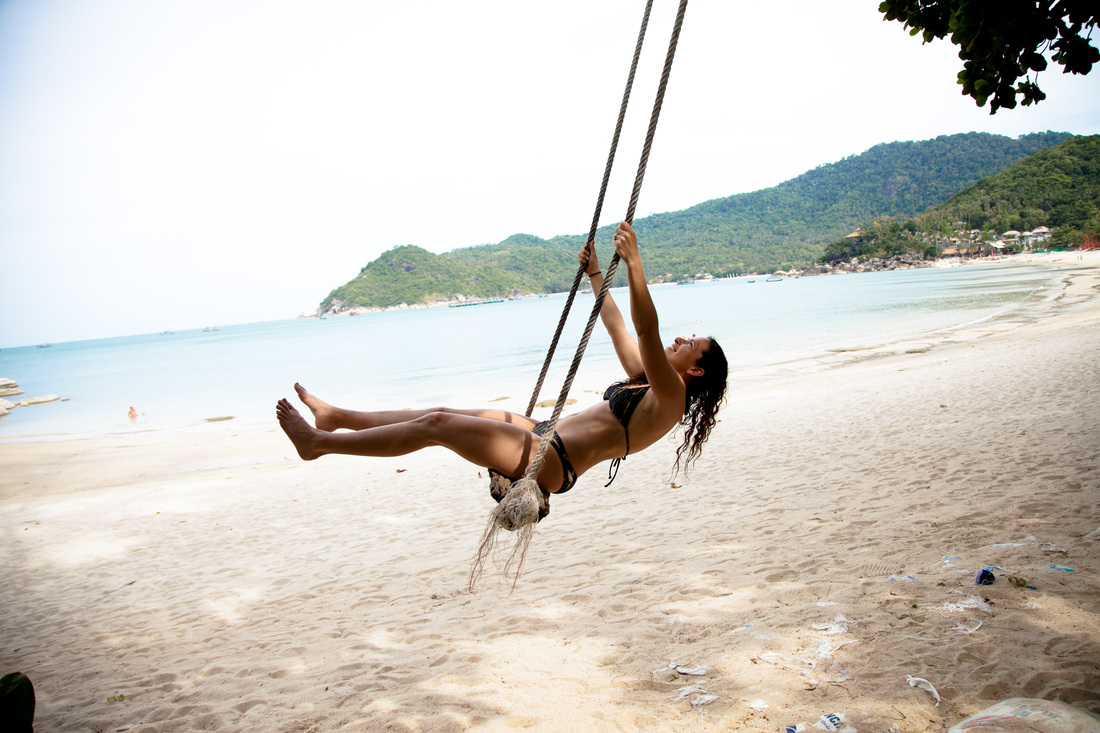 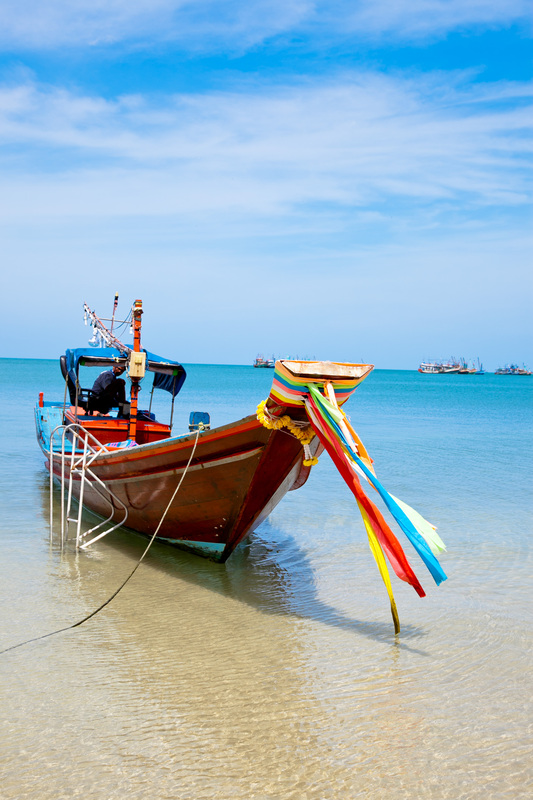 In college I had a poster of a similar Thai taxi boat, I couldn’t believe I was seeing one in person. 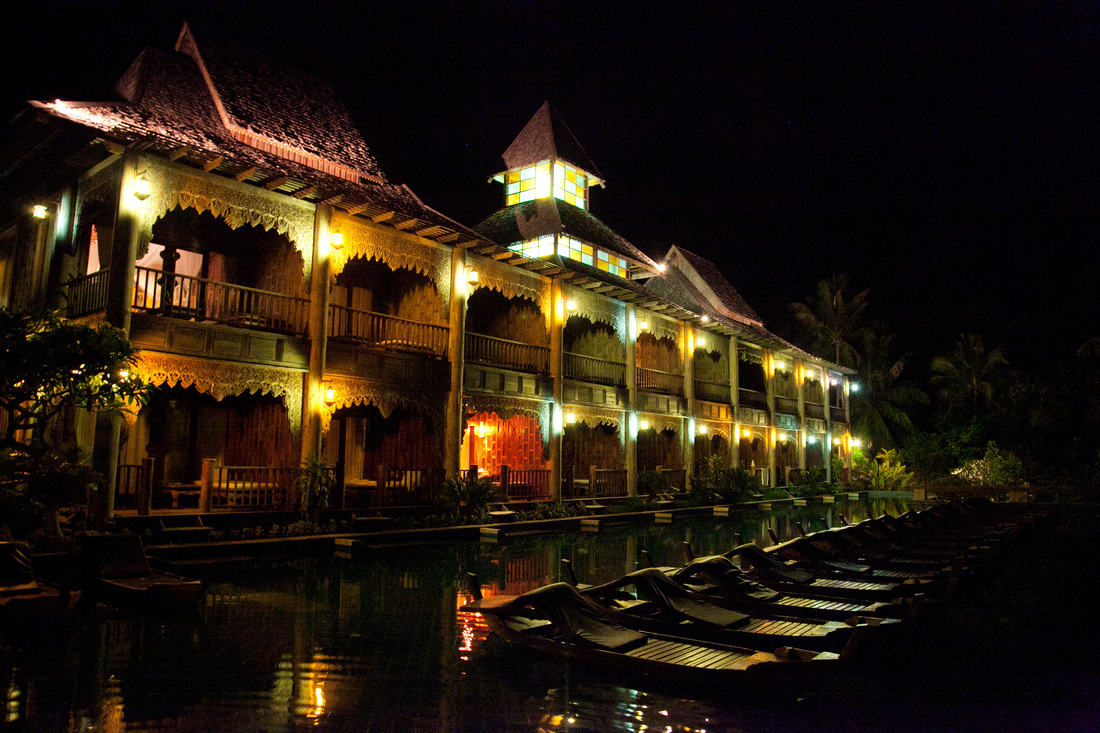 View of our suite at night. 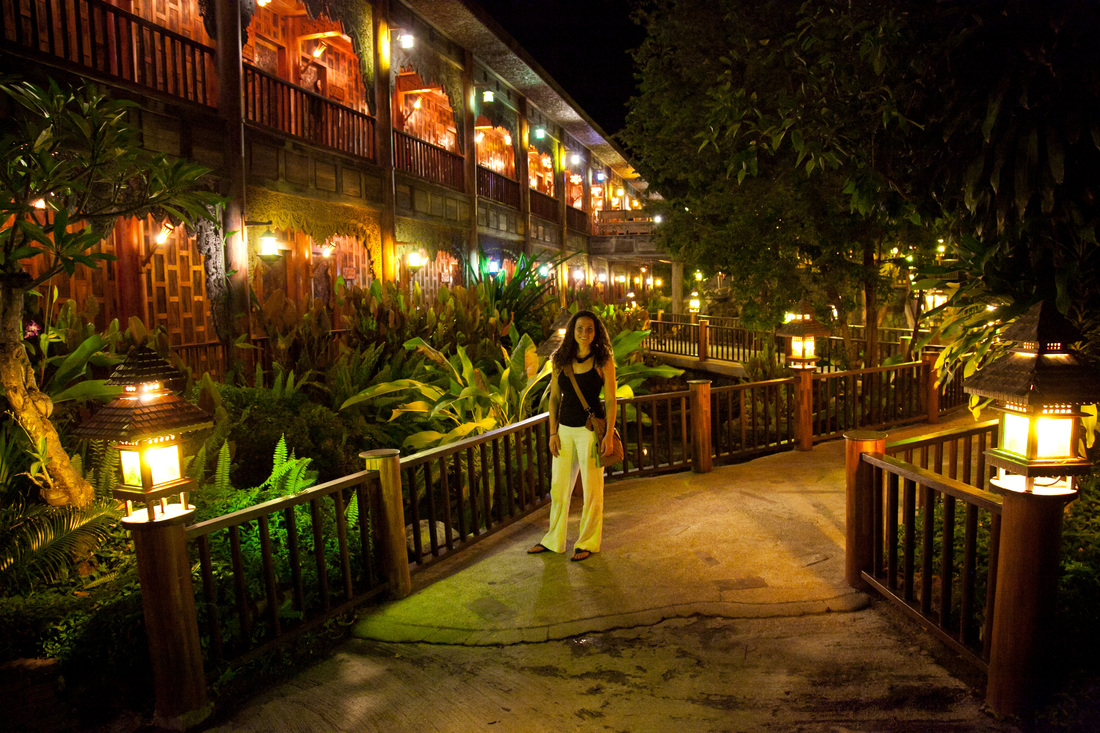 View of our suite at night.
Elephant trekking
The resort offers quite a few activity packages, one of them being elephant trekking. We were absolutely thrilled to try it. Who wouldn’t want to ride an elephant on an Thai island?! We were in. Since the resort tour was all booked up the front desk  suggested we book through the trekking company. (For those venturing to the resort, its half the price if you book straight through the company.) An unmarked vehicle picked us up at the resort, gee it didn’t feel shady at all! The Toyota pickup with a friendly Thai driver wearing slick blue Ray Bans took us on a 40 minute ride through the rugged terrain of the island. The driver manuvered past pot holes the size of boulders on tiny dirt roads. When he came up to a turn he would honk to alarm the oncoming traffic and at times even drove on the opposite side of the road to avoid holes. It was very impressive to watch but also a bit nerve-wracking.Scooters jetted past us sometimes carrying two adults and a small child in the front basket. How did these people do it?! Steep mountains, narrow dirt roads and a hell of a bumpy ride. We read that motor bike accidents are the most common type of accident on Koh Phangan and scars from such accidents have become known as the “Thai tattoo.” Glad we didn’t rent a scooter! So there we were, in an unmarked vehicle on the roughest roads we have ever been on – sounds safe, real safe. All I kept imagining was a news story about two American tourists getting kidnapped in Thailand. We kid, we kid, well sort of.

Thankfully we arrived at the elephant trekking spot in one piece. The area had a few huts where (we assume) the owners lived and four elephants were chained to trees. One of the tour guides grabbed Babar, the king of the elephants, and brought him near us. Man, those are some massive animals! You don’t realize it until you are standing inches away from them! 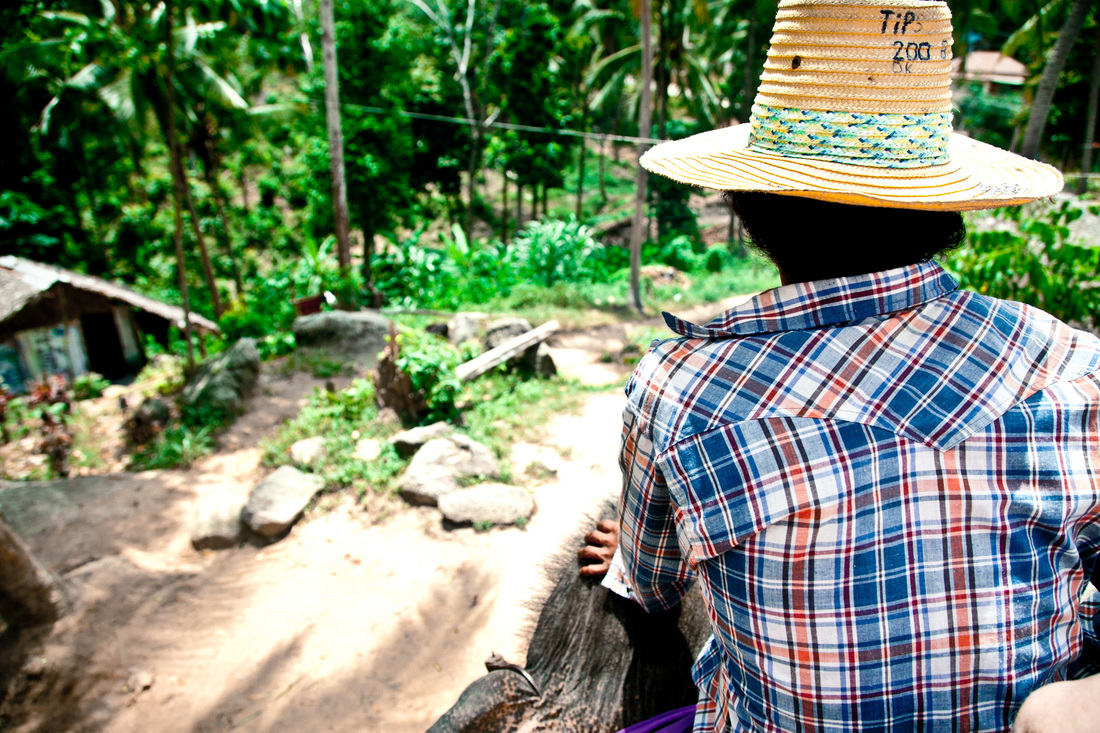 The guide then climbed up on his trunk and sat down behind his ears. Lucky for us we were told to climb up on a wooden platform and didn’t have to perform acrobatic moves to sit on the elephant. We spent the next hour joy riding around their property, up hills and through the jungle. The guide took our camera and kept taking pictures of us while telling the elephant to pose with his trunk up. We couldn’t help but to laugh but when the elephant wouldn’t follow him it seemed he would say, “get your ass over here boy” ha! He made the elephant do little tricks, such as crack a coconut with his foot and we both took turns riding up front on its neck.  Riding such a big animal felt surreal and we are both glad we could experience it!
Check that off our bucket list! 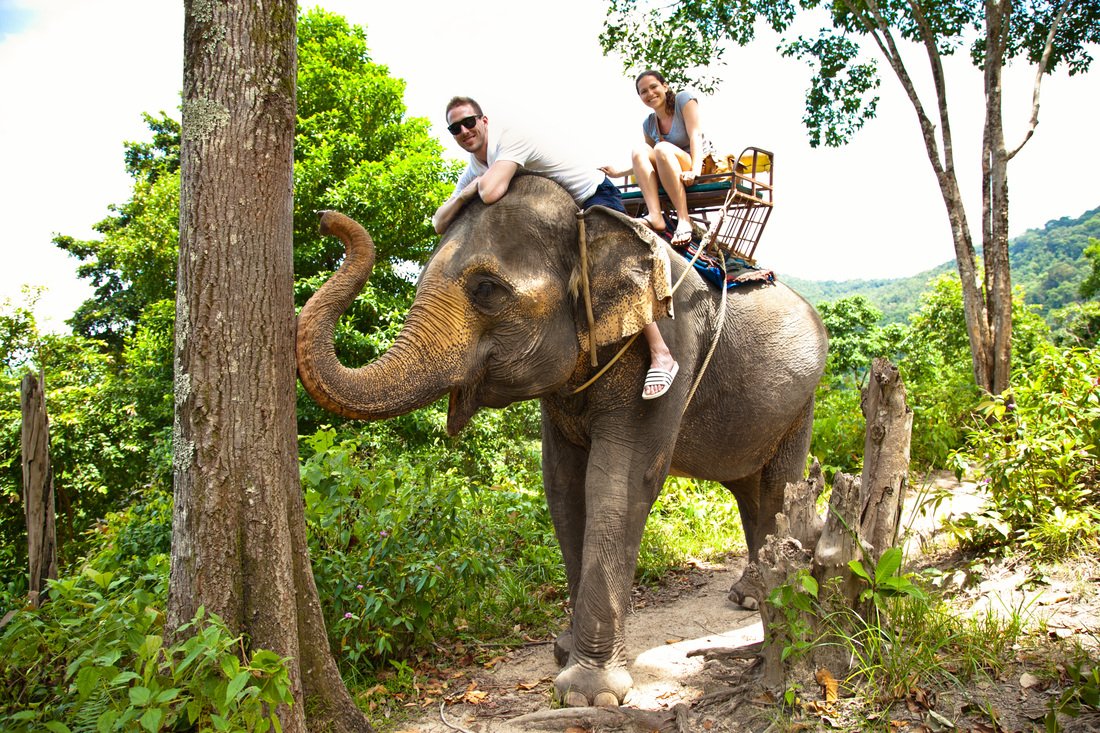 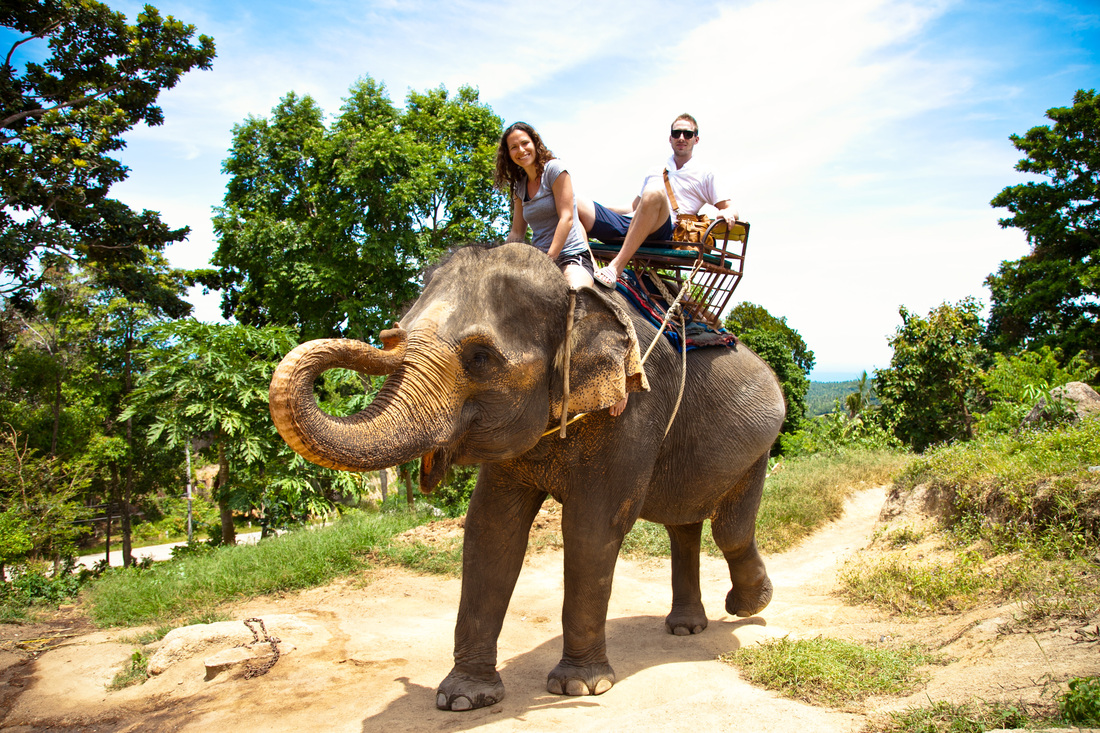 Back at the resort, we enjoyed a late dinner with some furry friends. There were dogs everywhere on the beach and we still don’t know if they were strays or actually belonged to those that ran the restaurants. They were all friendly and even took a nap at Dan’s feet while we ate dinner. 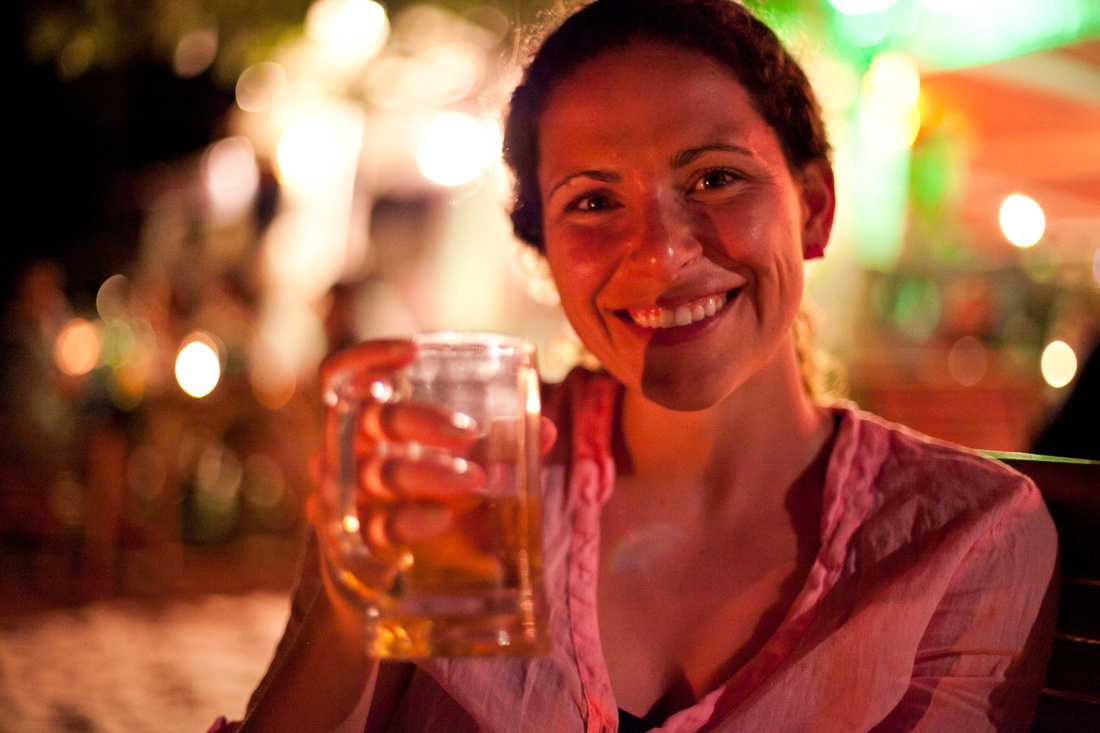 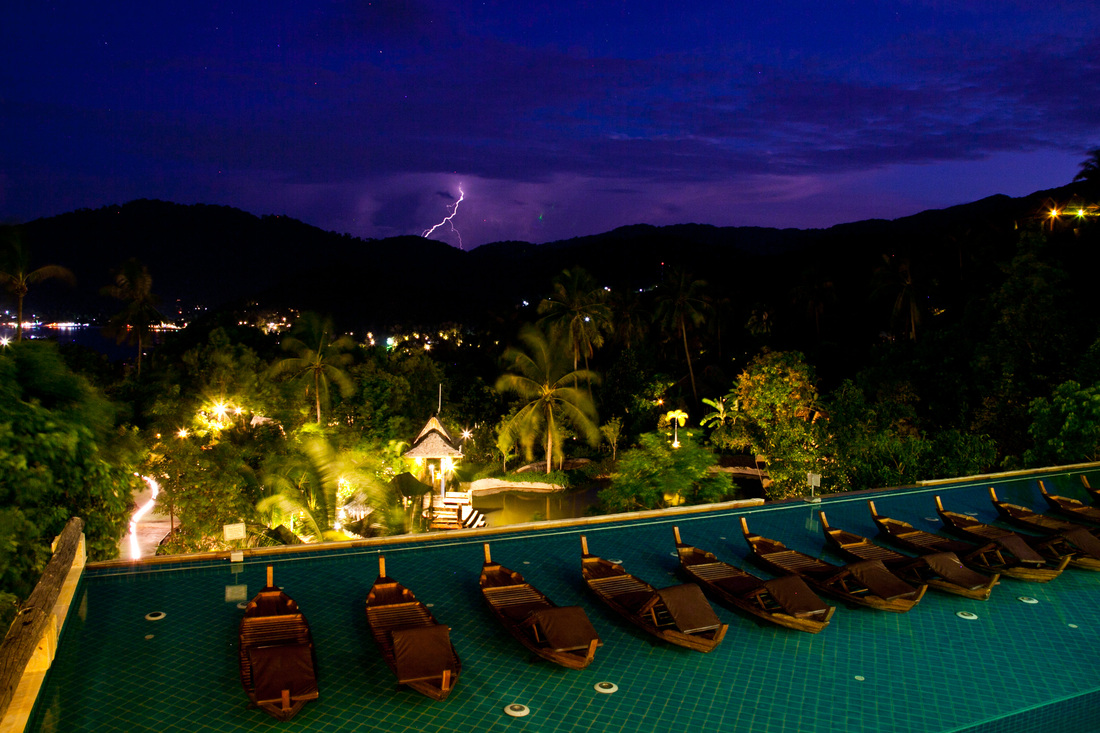 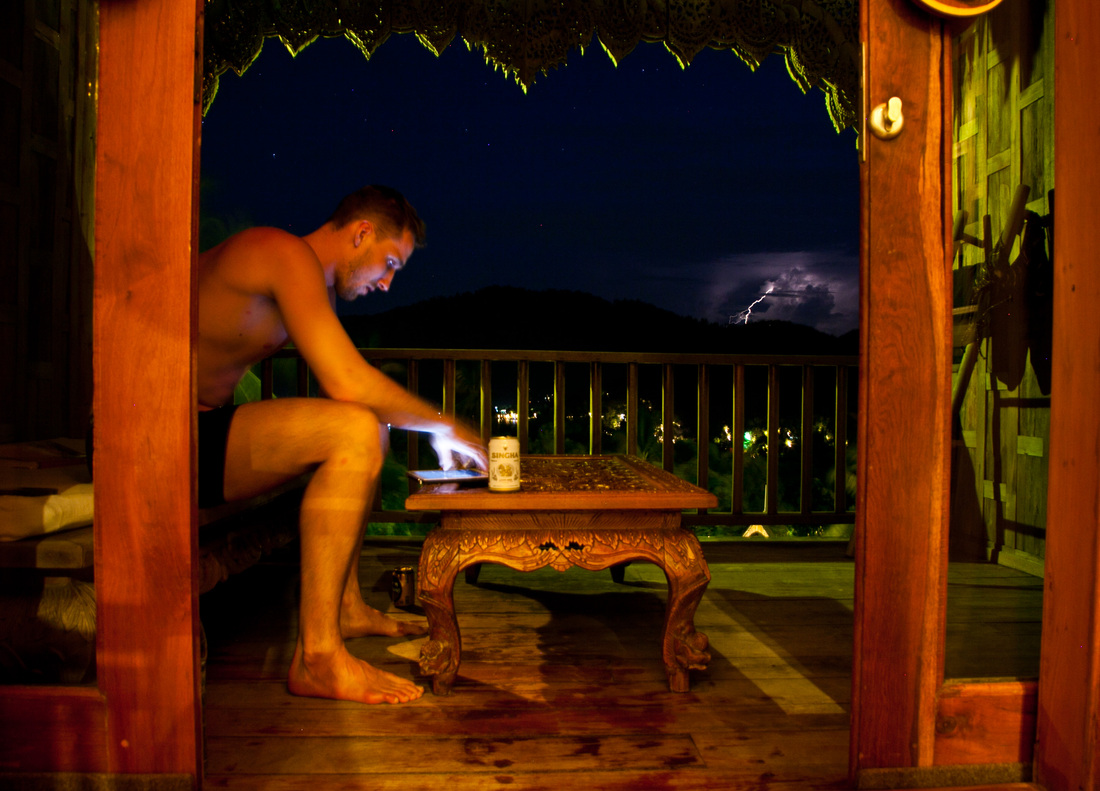 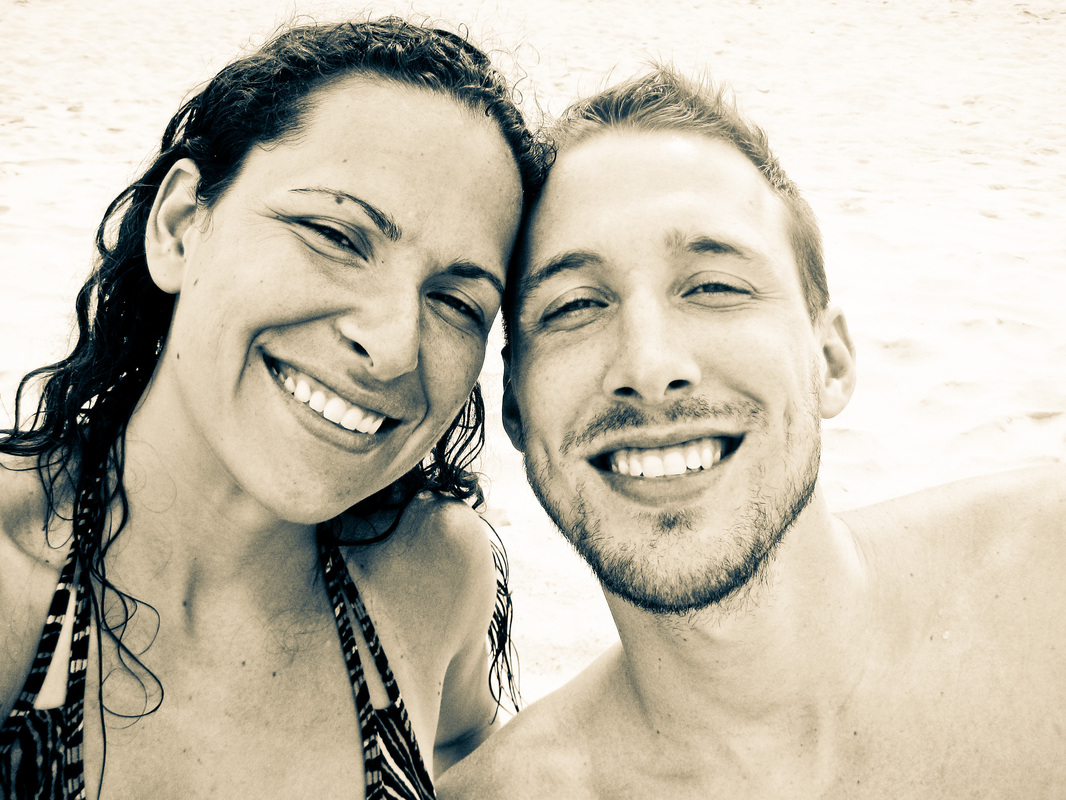 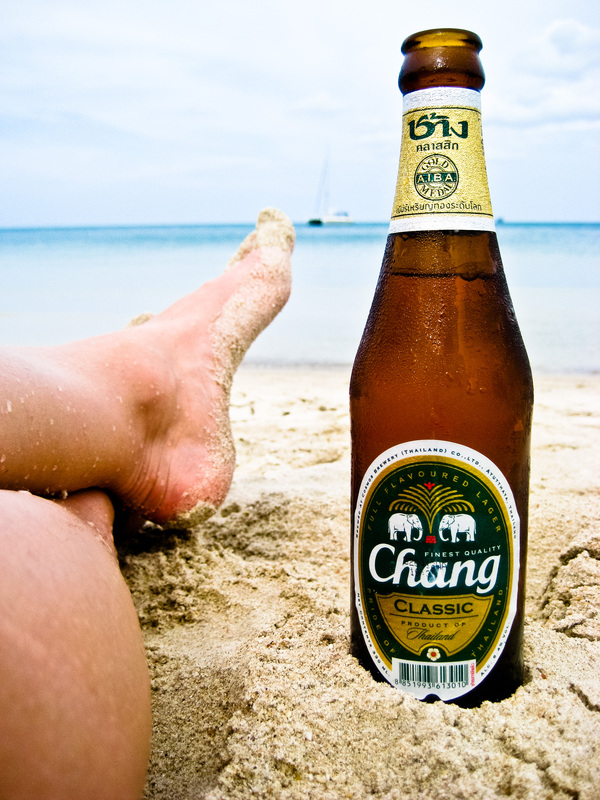 Enjoying some cold Chang beer on the beach.
We really couldn’t have imagined a better honeymoon! Sun, beach and complete relaxation!

Thai fun facts, aka an etiquette guide from the Santhiya Resort and Spa.